Dr Matti Joutsen, former director of HEUNI, attended the Kyoto Congress as a representative of Finland. He has kindly shared his informal reflections from the Congress with HEUNI. 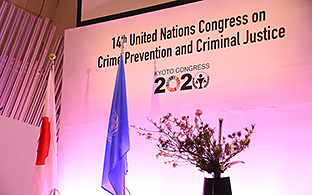 Dr Matti Joutsen at the Kyoto Congress, photo from https://kyotocongress.info/pictures/index.html

The Fourteenth United Nations Congress on Crime Prevention and Criminal Justice was organised in Kyoto, Japan, from 7 to 12 March 2021. It continued the long tradition of the world’s largest get-togethers on crime and justice, but in some respects, it was a very different Congress. Above all, it was the first major UN conference in any field to be organised after the beginning of the Covid-19 pandemic. The Kyoto Congress set the pattern for how this can be done in such unprecedented circumstances.

The Kyoto Congress was the first to be organised as what is now termed a hybrid conference, with some participants on-site roaming the conference halls and others participating remotely from all around the world. I arrived in Kyoto with doubts and worries. Can we hold a Congress in the midst of a pandemic? What is a “hybrid format”? Will anyone attend?

As soon as we began our work early on Sunday, 7 March 2021, my doubts and worries disappeared. At the Kyoto Congress, we had a truly global, interconnected, live and substantive debate, on a high level. This is unprecedented throughout the UN Organisation. The Kyoto Congress set the mould for all UN Conferences to come. What is more, the Kyoto Declaration, the main outcome of the Crime Congress, is remarkably substantive, balanced, well-structured and well written.

The Kyoto Declaration and the Congress Programme

While the Kyoto Declaration itself is not binding, it is of great significance to the international community. It has been laboriously drafted and negotiated, and since the representatives of 90 member states gathered in Kyoto have adopted it, it is clear that the document embodies their vision of what member states should commit to on the national level and how they would like to see international cooperation evolve.

The Kyoto Declaration is balanced in the sense that it deals with crime prevention and criminal justice at different levels from local to national and international issues. It covers a wide range of issues, including the need to support victims and vulnerable communities, gender-sensitive crime prevention, the rule of law, transnational crime, anti-corruption, emerging forms of crime, as well as the operation of the domestic criminal justice system and international cooperation. The Kyoto Declaration is also very timely, above all by including several paragraphs on the impact and response to the Covid-19 pandemic.

Since this was the first UN Crime Congress to be held after the adoption of the Sustainable Development Goals in 2015, it is understandable that the theme of the Congress was formulated as “Advancing crime prevention, criminal justice and the rule of law: towards the achievement of the 2030 Agenda”.

During the high-level segment of the Congress, representatives of regional groups, member states and other entities (such as the Thailand Institute of Justice) had the opportunity to give their statements. It is difficult to provide summaries of these rich and wide-ranging statements since each of the speakers was limited to three minutes. Several of the speakers were able to make only general references to, for example, the fundamental importance of taking effective measures in crime prevention and criminal justice, the link between these and the rule of law with the SDGs, the need for enhanced international cooperation, and the importance of the Fourteenth United Nations Crime Congress as well as the Kyoto Declaration.

Necessity is the mother of invention. After the postponement of the Congress from 2020 to 2021, the decision was made that the plenary and the Committee sessions would all be live-streamed, enabling anyone to follow them from anywhere in the world. Some attendees would attend in person, while most would tune in from their homes and offices across the world.

The hybrid model has its drawbacks and benefits. Trying to connect over 5,000 participants, when almost all were using their own equipment, means that individual connections would now and then be dropped. In the context of a global conference, the hybrid model also meant that many attendees were tuning in from different time zones and having to stay alert at unsociable times. Perhaps the main drawback to the hybrid model is that it does not provide the same vibrant mix of different participants gathered in one place. Quite often, the most rewarding part of conferences is formed by those chance meetings in the corridors and when socialising over coffee, lunch or dinner, random encounters that lead to networking and real exchanges of ideas.

There are also benefits. Obviously, one is the savings to the travel budget. Another benefit that I noted in the high-level segment was that the clear majority of the national statements were given by Ministers or other very senior officials with substantive responsibility for crime prevention and criminal justice in their own government. Yes, it is a question of just a three-minute and often pre-recorded video statement, but the mere fact that ministers make this statement causes them to become aware of the value of the work of UN Crime Congresses.

Safety and security are always major considerations at UN Crime Congresses. In the Covid-19 era, however, these concerns have taken on very new dimensions. The Japanese host government went to great lengths to ensure that those persons participating in the Congress had a reasonable expectation that they will be protected against infection. The participants could feel very safe while attending the Kyoto Congress, and I appreciate the care that was being taken by the host government and the UN Secretariat.

I have had the privilege of attending several UN Crime Congresses over the years. As a member of the national delegation of my country and having served also as Rapporteur-General and as Committee chairperson, I have had a ring-side seat to seeing how these Congresses have developed. I can safely say that the Kyoto Congress was a United Nations Crime Congress like no other.

It was a Congress like no other, and an experience like no other. I was very pleased and privileged to have been a part of it. Thank you, Japan, thank you UN Secretariat, and thank you, UNODC!