The route to a successful investigation of labour exploitation: notes from the CCPCJ 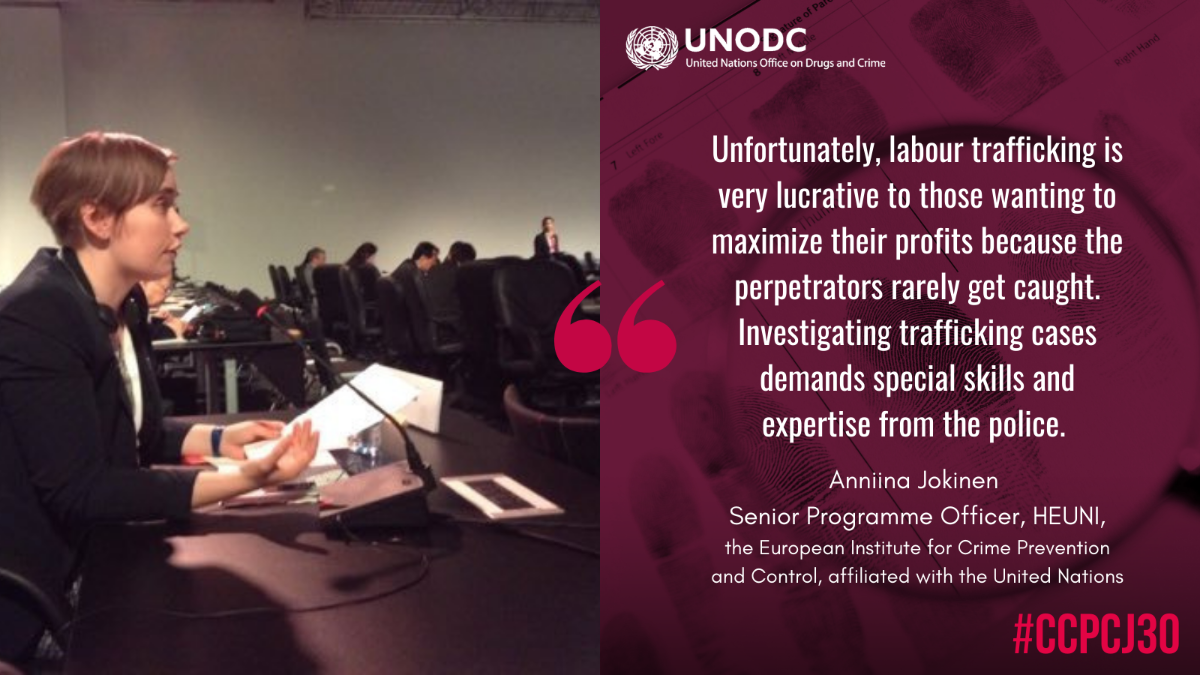 HEUNI and the Permanent Mission of Finland in Vienna with support from the UNODC hosted a CCPCJ side event on labour exploitation. The event was attended by some 35 persons.

Anniina Jokinen from HEUNI kicked off the event by introducing the FLOW Investigation Tool for labour inspectors and police. She advocated for a victim-sensitive approach to criminal investigations. Victims may initially be hesitant to share information with the authorities, which means that the relevant authorities must be able to build trust with the victims. Jokinen emphasised that “labour exploitation is a low-risk, high-gain form of corporate crime motivated by profit-making” and that “legal structures are used to hide grey and illegal activities”. Consequently, Jokinen called for the use of efficient financial investigation techniques. Tracking financial transactions and asset flows of both the suspects and potential victims may reveal useful information.

Katja-Pia Jenu, a Finnish Labour Inspector, proceeded to analyse the role of labour inspectors in detecting and preventing labour exploitation and trafficking. Jenu emphasised the importance of listening to employees’ stories, since, according to her, “in most cases, there is a conflict between what the employer and the employees say”. What is more, in her experience it is rare that employees are willing to share their experiences of exploitation straight away during an inspection as they may not feel comfortable sharing this kind of information to a stranger. To combat this, labour inspectors give out information leaflets and leave their contact details. The relevant information may include, for example, salary scales from collective agreements, as particularly employees with a migrant background may not be aware of the salaries they can reasonably expect.

Marius Martinsen, a Norwegian Detective Superintendent, talked about his experience with applying the HEUNI Investigation Tool in the shipyard industry. According to Martinsen, efficient inter-agency co-operation and establishing an onsite command centre at the shipyard were crucial parts of the project. They collected data from both employees and employers, which revealed a discrepancy between the working hours reported by the employers and those reported by the employees. Based on the employers’ reports, it appeared that the workers received a minimum hourly wage. However, based on the working hours reported by the employees, it became clear that the hourly wage was lower, and only 53% of the workers received minimum wage or more.

Finally, Silke Albert from UNODC Mexico provided a commentary on HEUNI’s Investigation Tool commending the concrete nature of the Tool and called for its wider dissemination. Albert called for the police to be trained in both recognising indicators of labour exploitation as well as treating potential victims in a victim-sensitive manner. Police should “not expect free flowing accounts that are from the beginning to the end consistent and non-contradictory”, but rather anticipate that victims may even be unfriendly and unwilling to cooperate. As a result, proactive investigation and financial tracking are important, as victims may not report labour exploitation.

Natalia Ollus, the Director of HEUNI, moderated a brief discussion; all panellists called for a comprehensive approach to tackling labour exploitation with increased resources and better awareness.