Our dear friend and colleague Gary Hill passed away on 18 September 2022. To those who knew him, Gary Hill was an irrepressible force of nature. His ebullient nature would fill the room when he came bouncing in, so often clad in his world-map jacket, pockets full of bal-loons and candy. His positive energy, in turn, would drive many projects, and inspired his legion of friends. 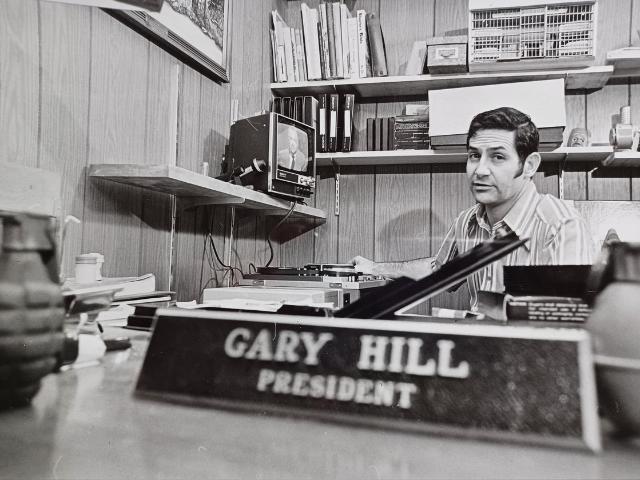 Like a force of nature, his impact was felt far and wide. And yet because much of his work was done out of the spotlight, along prison corridors or in the training of small groups, and in the quiet solitude of his study before an impressive array of six computer monitors (with Gary generally munching on a seemingly inexhaustible supply of self-made and frozen dinners), few know how much he has achieved, and in how many fields.

After graduating from the University of Nebraska in 1961 with a Bachelor of Sciences in Business Administration, he rose to become the President of the Northwestern Metal Company. In previous forays in private business, he had also worked as a garbage collector, as a fairgrounds pitchman and as a pilot for Skyway Aviation. Let no one say that Gary lived a dull life.

In 1964, at the tender age of 25, he started a chapter of the Junior Chamber of Commerce in a Nebraskan penitentiary. This was the beginning of almost sixty years of pro bono work to improve corrections locally, nationally and ultimately internationally.

His vision was to ensure that all correctional officers are properly trained, giving them the tools that they needed to do their job in accordance with the highest professional standards (which he had a large role in developing), and that they in turn were accorded the respect that they deserve for their difficult work.

In 1966, he joined the American Correctional Association, where he held what may be the national record for conference attendance. He clocked in over 100 of the biannual ACA conferences, missing only one from 1966 on. Undoubtedly in recognition of his stamina, the ACA presented him with the Association’s highest award in 2016.

His contribution to corrections on the national level was also recognized by the federal government when, in 2017, he became one of the 18 commissioners on the US Commission on Accreditation for Corrections.

He had too much energy, however, to be limited to his beloved town of Lincoln, his state of Nebraska, or to the United States. Gary’s work for the Junior Chamber of Commerce led, in 1970, to his being appointed as the organization’s national Director of Correctional Programs. Since the JCC had an international aspect, Gary contacted Gerhard Mueller, then serving as Chief of the UN Crime Prevention and Criminal Justice Branch, which at the time was located in New York. Professor Mueller had been instrumental in setting up the Alliance of Non-Government Organizations on crime prevention and criminal justice. The group met monthly, in the UN building in New York. Gary became a regular attendee and, unsurprisingly (to those who knew Gary), in a few years chairperson of the UN Alliance.

And in this way corrections took Gary from Lincoln to the ACA and on to the United Nations. During the early 1970s, when Gary was beginning to shuttle between Lincoln and New York, Beria di Argentine was establishing the International Scientific and Professional Council (ISPAC) as a vehicle for academics, NGOs and professionals to provide support to the UN Crime Programme. Gary quite naturally and smoothly added the annual ISPAC meetings to what would surely be, to an ordinary person, an exhausting work and travel schedule.

One of the ISPAC subgroups dealt with corrections. Gary found several sympathetic souls here, among them Luigi Daga. With Daga, Gary wrote (and then fine-tuned) a training manual designed to be used internationally for correctional workers, with built-in adaptations to different legal and administrative systems. In preparing the manual, they gathered information on correction training programmes around the world. The manual has been used in over 100 jurisdictions.

The manual, however, was only the first fruit of Gary’s international work. He has drafted more than 40 correctional training manuals, and has travelled to at least three dozen countries to provide hands-on training to correctional officers, from Afghanistan to Rwanda, Algeria to Somalia. In addition to ISPAC, he has worked together with many institutes in the UN Crime Programme Network, including NAUSS (in cooperation with which he wrote a handbook on the religious rights, duties and customs of Muslim prisoners), SII, UNAFEI, and the Thailand Institute of Justice. He has served as a UN expert in updating the United Nations Standard Minimum Rules for the Treatment of Prisoners (the Mandela Rules) and in developing standards for the treatment of female offenders (the Bangkok Rules). He has further assisted the Best Practices Unit of the United Nations Office of Peacekeeping Operations by reviewing correctional work associated with United Nations peacekeeping, and preparing guidance documents. To provide a structure for all of this international training, Gary established CEGA Services as well as Contact Center, Inc., a private, nonprofit, international information and referral clearinghouse working in the areas of human services, criminal justice and illiteracy. He also worked tirelessly to develop the UN Programme Network Institutes “International Criminal Justice Knowledge Center” ( http://www.justiceknowledgecenter.org/ ).

Organizing these ancillary meetings as well as the UN Crime Congress exhibitions was no simple task, something which could be done by mechanically slotting in what meetings and displays would be held when, and where. Gary sought to ensure that they were tied as much as possible to the theme of the Congress, and the information from them was designed to flow into the formal sessions. He also sought to organize them, to the extent possible, so that they do not overlap with formal sessions or other ancillary meetings covering similar issues. To service the meetings, Gary’s infectious enthusiasm mobilized an international army of volunteer (unpaid) interns who provided interpretation as well as a summary of the proceedings to be distributed to participants.

His work in the private sector, in local, national and international corrections, and in the UN Crime Programme should have been enough to fill several lifetimes. He served as Staff Training and Development Director for the International Prison and Corrections Association. He was an adviser to the Romania Institute for Prison Studies, a member of the Board of Trustees of the Lincoln Community Foundation and a member of the Salford University Centre for Prison Studies Advisory Group, in the UK. He regularly taught classes at the University of Nebraska as well as for UN Institutes in Italy and Saudi Arabia. Gary also served as the Managing Director of the Nebraska State Holocaust Memorial. He was co-opted in 2004 to serve on the U.S. Institute for Peace Council of Experts of the International Network to Promote the Rule of Law. He has received special recognition from the International Association of Correctional Training Personnel, and the International Corrections and Prisons Association.

Gary Hill was also a gentle, kind soul, a true Mensch. My warmest recollection of him was of the international conference when I woke on the first day to hear that my mother had passed away. Gary ensured that he could spend time with me, sharing stories that would comfort me and carry me through the long conference. A few weeks afterwards, he told me that he had arranged for Kaddish to be given in my mother’s memory, in the form of the planting of a tree. Gary Hill was a small boy from the Great Plains, who grew up to become at home anywhere in the world, whether it was in Afghanistan or as Rwanda, in the wilds of the Vienna International Centre or the far reaches of PNI meetings around the world. He was a man who could talk to prison staff with different backgrounds as an equal, and make friends across cultural divides.

Wherever he went, he lived true to the motto that he had posted on the website of the Lincoln Community Foundation: “We cannot have freedom for ourselves unless we are willing to help liberate all who live in fear, poverty and oppression”. The time has come to say Kaddish in Gary’s memory. He has now gone to join his beloved wife, Cece.

He will very much be missed by his many friends. He has, however, accomplished much in his life. We can be comforted by joyous memories of the time spent with him, working with him, and laughing with him.