HEUNI and the Permanent Mission of Finland in Vienna with the support of UNODC hosted a side event on corruption during the CCPCJ. The event was attended by over 80 people. 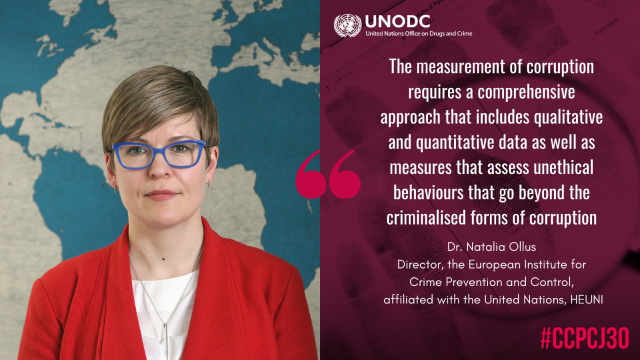 Dr Natalia Ollus, the Director of HEUNI, commenced the event by presenting findings from a recent study on structural and unseen forms of corruption in Finland. Dr Ollus emphasised that despite Finland performing well in international anti-corruption rankings, “corruption in Finland does exist in certain areas and certain sectors”, particularly in the financing of political parties and candidates, urban planning, construction and the so-called Old Boys’ networks. She emphasised that “in order to really capture all the various elements of corruption, we need additional data”. Tackling corruption effectively “requires resources, specific funding and a specific mandate”.

Matthew Moorhead from the Commonwealth Secretariat proceeded to introduce the Commonwealth Anti-Corruption Benchmarks. The Benchmarks are a tool to help governments and public sector organisations assess their anti-corruption measures in achievable, practical, and auditable ways across different cultures. They are intended to “provide a holistic and interlocking system that aims to reduce and deal with the risk of corruption in the private and public sectors”. Organisations can review their policies against the Benchmarks and consider upgrading them to meet or even exceed the standards. The tool also includes an example of an anti-corruption program intended for private sector organisations wishing to enter public sector contracts. Overall, “the benchmarks promote the concept of honesty, loyalty, accountability, and transparency and provide for specific anti-corruption measures”.

Dr Roxana Bratu from the University of Sussex offered insights on capturing corruption and integrity. Dr Bratu called for an escape from the classical understanding of corruption to be able to develop up-to-date tools to measure it, because contemporary measurements are “unable to capture change or progress”. Indeed, contemporary anti-corruption paradigm is based on the assumptions that corruption can be defined, measured, and controlled. However, the current approach is problematic is several ways. For example, there are issues concerning the perception of corruption, particularly in terms of hidden corruption, lack transparency of the contemporary methodologies, lack of clarity with proxy measurements, and potential cultural biases. Dr Bratu identified two potential ways forward in measuring corruption: firstly, measuring unethical behaviour more widely, or secondly, measuring integrity. We should also “move beyond the nation state, because we know that corruption doesn't stop at the border”.

Salomé Flores from UNODC Mexico concluded the event by speaking about a holistic approach to measuring corruption and announced that a Task Force on Corruption Measurement will be launched in July 2021 in line with the UNCAC. The purpose of the task force is “to produce new guidelines for countries to adopt them and use them to produce information that is comparable across the world”. Flores emphasised that according to the UNCAC, “all countries should be able to collect, exchange and analyse information on corruption”.

The side event’s moderator, Steven Malby from the HEUNI Advisory Board summarised the key points of the discussion.